Update Atrium closer to stock proof than ever; What changes can we expect?May 24, 2022

What is a Plesk license? Get acquainted with the different types of Plesk licenses and how to buy themMay 24, 2022

The longest downtrend in the history of bitcoin: the weekly Kendall closed at a loss for the eighth consecutive timeMay 23, 2022

FaaS is a service that allows developers to run applications without having to manage a cloud infrastructure. There are currently servers without servers; But they have been removed from application development.

Using a server-free model, cloud service providers take routine actions such as preparing, maintaining, and scaling server infrastructure, and developers can work on developing their own code. In this article we will talk more about FaaS. So stay with us until the end.

FaaS stands for feature as a service, a service that allows developers to design and execute code and applications without the need for cloud infrastructure management. Many people consider FaaS and Serverless to be synonymous; But the two are different and each has a different definition.

FaaS is actually a subset of server-free computing and is known as a way to implement a server-free architecture; So we can say that these two phrases and words are different from each other. Serverless provides developers with an abstract form of infrastructure such as servers and resources. For this reason, the developer’s focus will increase and he will focus on executing his code.

If there is no request, the server will automatically shut down and provide resources for other requests. It is interesting to know that while Serverless is not working, it will not cost you anything, and this advantage will save you money.

What do IaaS, PaaS and FaaS have in common? 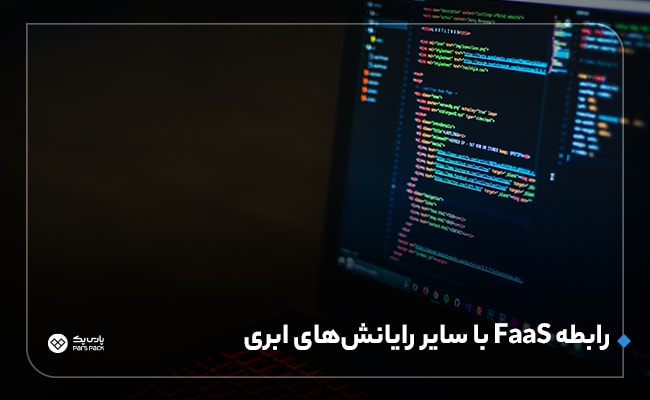 How is FaaS different from other cloud services?

IaaS offers the lowest level of abstraction for the user. With IaaS, users have complete control over their technology-related infrastructure, software and tools; But they do not have to control or manage the physical infrastructure and the data center. Another point is that with IaaS, developers can choose the abstract layers they want and manage everything. Also, IaaS users can layer managed services to make the application easier to manage and maintain.

PaaS adds another layer of abstraction to users. With PaaS, users no longer have to manage their operating system, runtime, and other components of their application as a whole. However, keep in mind that users will still have full control over infrastructure configurations and applications.

In fact, PaaS provides a fully managed infrastructure solution for developers who want to run and run applications quickly. With PaaS, developers can focus entirely on their work and development, leaving the processes to the supplier’s management.

Of these three services, FaaS offers the most convenience and performance. Using FaaS, developers have access to a platform that will execute the logic of the application on demand. The service provider will fully manage all program resources and other infrastructure components; For this reason, programmers and developers welcomed and used FaaS. 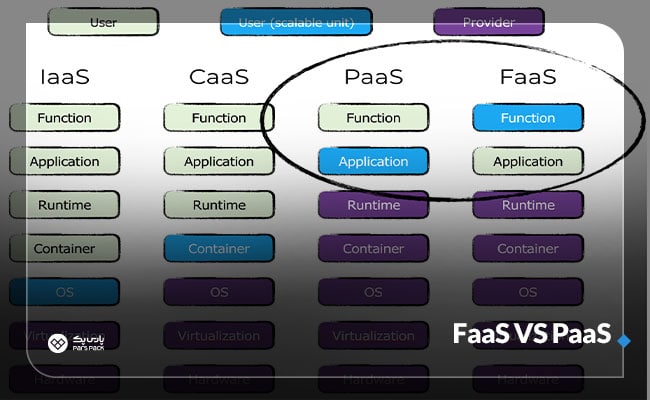 Investigate the differences between FaaS and PaaS

Configuration is one of the differences between the two services. Due to its ease of use and well-managed solutions, FaaS has very little delivery time. Although PaaS offers more abstraction than other cloud computing models, it will need to be configured. This PaaS problem must be configured according to the amount and level of control and access in question, it can be considered an advantage or a disadvantage.

Operations are other differences between the two services. FaaS technologies run all applications based on individual requests; This is not the case with PaaS technology. PaaS resources can be increased or decreased automatically if needed. Of course, keep in mind that some resources usually always work.

Scalability is another factor that differs from PaaS and FaaS. For example, the scalability of PaaS is increased or decreased as needed; But the developer must consider configuring it. In contrast, FaaS will not require planning capacity and resources and will be more scalable.

Another difference between FaaS and PaaS is pricing. PaaS prices vary depending on the supplier and have different plans. For a small load, the price of PaaS is not cheaper than FaaS; But FaaS allows users to pay for feature calls. This will save a lot of money and time. If you have a heavy load, use PaaS, and if you have a light load, use FaaS.

How does FaaS work?

Programs written in previous years typically use an integrated architecture. The integrated architecture allows the program to be designed as a whole and one implementation. Therefore, they had to release it at once. Over time, developers began to use microservices. Microservices are a set of modules that can be deployed independently. Another point is that they can be worked on independently and separately, which facilitates the testing and maintenance of programs. 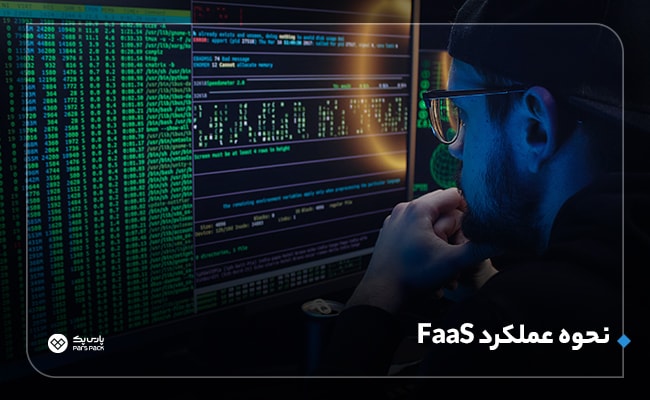 How does the function work as a service?

A function is actually a microservice that can perform only one action in response to an event. Using FaaS, when a function is started, the server provider rotates the server, executes the function, and then shuts down the server. When the server shuts down, such computing resources are allocated elsewhere. This will have a direct and indirect positive effect on maintenance.

Developers using FaaS actually have access to a platform that allows them to run code for their applications. The most important feature of FaaS is simplicity. In order for developers to get the most out of FaaS, they need to make sure that each feature performs only one operation. Keep in mind that the scope of implementation must be limited and at the same time effective. Asking a function to call another function will slow down the program over time and increase costs accordingly.

Overall, there are many benefits to using FaaS for developers and programmers: 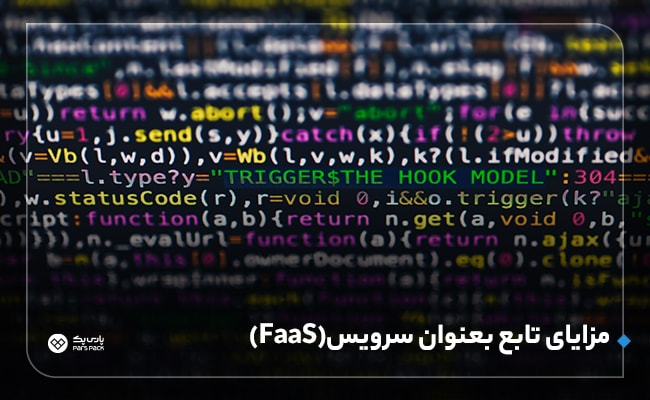 What are the benefits of using the FaaS service?

In general, FaaS can be used for web applications, data processing, online chat bots, archiving features and more; But to choose FaaS, it is better to pay attention to these points.

Workload is a point to consider before using FaaS. FaaS is usually used for fixed workloads and you can use it if your workload is fixed or light.

Because FaaS pricing is based on feature performance, it may not be cost-effective to use this architecture and service compared to PaaS if the workload is high. If your workload is relatively small, FaaS will be the best option for you and will reduce your costs.

As we said before, FaaS is one of the most abstract cloud services. Think about the amount of control you prefer over your configurations and infrastructure, and use PaaS if you want more control. Developers who want full control over their infrastructure can take advantage of IaaS.

To use PaaS or IaaS or FaaS, you need to consider your management and computing needs. If you don’t have a heavy workload and don’t want to spend a lot of money on servers and resources, don’t forget to use FaaS. If you want to save time, FaaS is still the best choice for you; But last but not least, consider the IaaS and PaaS features to use when needed.

FaaS stands for function as a service, a service that helps programmers run their code and programs.

2. What is the difference between a server without a server and FaaS?

FaaS is a subset of server-free computing and is known as a way to implement a server-free architecture.

3. Are FaaS, IaaS and PaaS different?

Yes, all three presentations are cloud computing; But on an abstract level, which they present to the consumer, they differ from each other.

4. Which is better between FaaS, IaaS and PaaS?

The answer to this question will depend on the workload and; But it can be said that for a light load, the use of FaaS will be very appropriate. If your workload is high, we recommend using PaaS; But if you want to take full control of the infrastructure, using IaaS is the best option for you.

5. What should we pay attention to when choosing a FaaS?

Workload and control and locking of the supplier

What is FaaS or a function as a service? Everything you need to know about the feature as a service for the first time in Parsupak. appear.